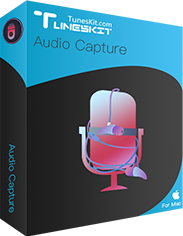 TunesKit Audio Capture is the smartest audio grabber to capture any audio playing on the computer and save the recorded tracks in MP3, AAC, FLAC, WAV, etc format with lossless quality to play on any devices without limitation.

TunesKit Audio Capture for Windows is a multi-track sound recording tool specialized in capturing any kind of audios on computer, including streaming music playing in web players, desktop media players and other programs within one click.

As a powerful sound recorder, TunesKit Audio Capture for Windows is able to grab just about any sound that your computer’s soundcard outputs, including streaming music, live broadcasts, in-game sound, movie soundtracks, etc. through browsers or web players, like Chrome, Internet Explorer, etc. It can also record sounds reproduced by media players and other programs, such as RealPlayer, Windows Media Player, iTunes, QuickTime, VLC, and so forth. Whenever you hear an appealing song, a great radio stream, or any other sounds you’d like to record, TunesKit will help you capture them by sparing no effort. It’s your best assistance to capture iTunes, Apple Music, Pandora, etc. as well as extract any audio tracks from videos.

Multi-track audio grabber to capture several tracks at once

TunesKit Audio Capture is a versatile and easy-to-use multi-track audio recording software capable of capturing a single or multiple tracks simultaneously and saving all records independently in original high quality, meaning you can play different tracks on several programs at the same time without worrying the audios would mix together. You are also provided with the option to merge all recorded audio tracks together into one file. All the recording tasks will be accomplished within one click only.